Support this site: Buy our books, tapes and newsletters 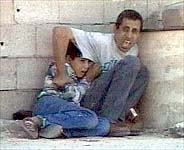 Moments before he was shot to death, 12 year old Mohammed Al-Doura cowers in terror as Israeli troops shoot at him and his father

WE WATCHED in horror the killing, by the IDF (Israeli army), of a 12-year-old Palestinian boy, Mohammed Jamal Al-Dourra on Saturday, Sept. 30 and his falling lifeless into his wounded father's lap. According to witnesses, the boy's father, Jamal, shouted above the gunfire, "My child is dying", but there was no let-up in the firing. The boy cried in terror while bullets ripped into the breeze block wall beside him and his father waved wildly to attract attention. Then the terrified boy slumped as he was hit. A Palestinian ambulanceman tried to make his way across the road to the pair but was shot dead. It took a further half an hour before another ambulance team could reach them and take them away. The father had four bullet wounds in his right side, from his shoulder to his calf, but survived. Canadian TV felt compelled to warn their viewers of the offensive and disturbing nature of some pictures showing the terrifying killing of this boy. The number of people killed by the Israeli army is rising almost by the hour. Israel uses live ammunition, helicopters, rockets and heavy tanks. Crimes against the Palestinians have been committed by the Israelis for the past 52 years in plain sight of the entire world. --Simon Ibrahim, Edmonton Sun, October 4, 2000 and The Daily Telegraph, Oct. 2, 2000

Hoffman's note: Unaware that a French TV crew had footage of the shooting that would be made available to the public, the Zionists claimed that the Israeli army (IDF) was not responsible for this boy's murder: "The IDF has concluded that the shot which killed the boy came from the northwestern corner of the junction, close to the IDF outpost. Thus IDF fire could not have killed the boy because of the impossible angle of the shot."

This propaganda front was put forward because--thanks to an anomalous French TV crew--the murder of this Arab boy actually got some broadcast time on European TV anyway, threatening to unseat Anne Frank as the universal trademark of injustice to children.

Zionist agent Joseph Farah, a so-called "conservative" has published reports on his website suggesting that Al-Doura was killed by Palestinians.

Farah, a Y2K mountebank who peddled a stream of lurid but highly lucrative books and videos touting "the-sky-is-falling" chicken little scenarios in 1999, is a flak for the Pharisees. Farah "forgot" to mention however that when the Israelis thought that Al-Doura's murder would go down the same memory hole where the killings of countless other sub-human (according to the Talmud) Arab goyim have gone, they admitted they killed him:

"After a closer examination of the (TV) footage...An investigation by the IDF's southern command has revealed that the boy was indeed killed by IDF fire."

Zionism is all about show biz. Without talent agents, TV producers and spin-doctors it cannot exist. From Anne Frank to Mohammad Al-Doura, the question is never one of human rights but of ratings. This was revealed in Brill's Content:

PR Experts Sell Israel's Point of View: In New York Israeli government officials were afraid that the conflict in the Holy Land was making them look like Goliath to the Palestinians's David. So they convened a meeting with America's top P.R. doctors and brainstormed about their image problem.

This past fall, televisions throughout the world flickered with sadly familiar scenes -- stone-throwing Palestinian youths fighting with armed Israeli soldiers.

As unrest spread from a Jerusalem holy site to the Palestinian territories, Israelis feared fallout from the violent images that were being broadcast to viewers around the globe. "We looked like Goliath and they looked like David," says Nachman Shai, the Israeli minister who coordinates the country's international information efforts. "David is always more popular." Desperate to win public sympathy and alter the course of the media war, the Israelis turned to those they thought could help them best: American publicity powerhouses.

On October 12, Shmuel Sisso, the Israeli consul general in New York, presided over an extraordinary gathering of about a dozen consultants who offered their expertise for free -- from Howard Rubenstein, who handles such high-profile clients as Donald Trump and the Duchess of York, Sarah Ferguson, to Ken Sunshine, who advises Barbra Streisand and Leonardo DiCaprio. "When you have a war you need the best generals, and when you have a media war we need the best PR people," says Sisso, who at the time was fending off criticism that he was mangling Israel's relations with the international media.

...Neither Sisso nor any of the PR experts present was anxious to speak about the late-afternoon meeting...Howard Rubenstein is more forthcoming. "It was a very unusual gathering of people with real savvy," he says, calling the group "top-drawer; you had a few hundred years of experience around the table." ...In addition to Rubenstein and Sunshine, they included David Garth, who did the media campaigns for New York politicians Ed Koch and Mario Cuomo, and Michael Miller, executive vice-president of the Jewish Community Relations Council of New York.

For Israel's antagonists, this public-relations mobilization comes as no surprise. "There is probably no limit to the amount of time and money that [the Israelis] are going to be willing to spend on this project," says Hussein Ibish, the communications director of the American-Arab Anti-Discrimination Committee (ADC), "because the Israelis have long realized, and the Palestinians are beginning to realize, how decisive the battle for public opinion in the United States [is]." ... Rubenstein's firm provided pro bono assistance in placing Israel's representatives in various media outlets.

His son, Steven Rubenstein, one of the firm's executive vice-presidents, helped draw up a rapid-response plan that was distributed to Sisso and Shai. The younger Rubenstein advised the consul general on the subtleties of the American media, "from the news cycles to who the right reporters are to who over time has shared Israel's perspective." (When asked who the "right reporters" were, Steven Rubenstein declined to elaborate.)

The Americans counseled the Israelis "that the war of images was being won by the Palestinians," Steven Rubenstein says. "We felt people were missing the full truth and that if you could show a fuller picture visually, it would be easier to make the Israeli case." ...Since the October 12 conference, the Israelis have acknowledged that they could use help. They continue to receive counsel from American professional consultants; as of press time, there had been at least three follow-up conference calls with the PR experts. Source: Brill's Content | Online Only 12.28.2000. http://www.brillscontent.com/2001feb/notebook/israel.shtml

Even the pr experts can't deal with the hidden facet of the murder of this 12 year old boy--the Israeli killing of the ambulance driver who tried to rescue him. Not even Hollywood honchos or kosher conservatives have been able to whitewash the ambulance driver's murder, so level two treatment is accorded it--it's an "anomaly' that no longer exists, except within the memory of the Palestinians and in the pages of this web site.

So the deceivers were forced to tell the truth: "After a closer examination of the (TV) footage...An investigation by the IDF's southern command has revealed that the boy was indeed killed by IDF fire." This is the official Israeli army statement. Now it has been retracted?

Israeli atrocities are invariably described in the American media as "Israeli-Arab clashes" thereby attempting to establish an equivalence between the occupiers and the occupied, between tanks and helicopter gunships and stones and slingshots, between Goliath and David. But note well this report from the London Daily Telegraph of Oct. 2, 2000:

" Before the boy's death (12 year old Mohammed Jamal Al-Dourra), the shooting by armed Palestinians was sporadic and limited. After news of the killing spread, it became a matter of honor for Palestinian men to go into battle with the Israeli army. 'I saw how the Israelis shot dead our children. They choose them because they are an easy target,' said Maysa Abu-Zidan, 23, a medical volunteer working at Netzarim junction, where the boy was killed on Saturday, Sept. 30. I shouted to our Palestinian police, 'Are we going to stand there and do nothing? Go and defend our people'."

The killing of Palestinian kids is business as usual. If those were Jewish kids who were throwing stones and getting shot for it, the slaughter would be stopped within 24 hours. Arab blood is mighty cheap. What makes their blood so cheap? The ideology of the religion of Judaism, which even Jewish atheists have imbibed through distillations such as Zionism. Judaism teaches contempt for Gentiles, who are seen as a curse. Gentiles are the people who the Talmudic texts describe as "not Adam," i.e. less than human. Or, as one of Judaism's illustrious founding sages, Rabbi Shimon ben Yohai wrote, "Even the best of the gentiles should all be killed" (Mechilta, Beshalach 2). The Israelis have certainly taken Rabbi Yohai's injunction to heart this past week.

The Zionists haunt us with the more than half-century old ghosts of the Nazis' Warsaw ghetto, while right now, in the Gaza ghetto, Israeli occupation troops mow down Palestinians with impunity. These are the racist uses of the "Holocaust" cult.

It is as if a different dimension has come into existence, the dimension of the Master Jewish Race, the only people in the cosmos entitled to behave worse than the Nazis. Jewish crimes in Palestine evince no meaningful protest from any segment of Western society, only token wrist slaps and paralytic chatter amounting to the articulation of moral shades of gray, even as more children perish at the hands of the Holy People.