An Israeli soldier who shot and killed an unarmed Palestinian teen-ager in the Gaza Strip has been sentenced to 49 days in jail for violating the army's rules on when a soldier can open fire, the army said Sunday. The Palestinians have repeatedly accused Israeli troops of war crimesand atrocities against civilians, but punishments meted out to Jewish soldiers have been extremely rare. The soldier fired a .22-caliber rifle, hitting 14-year-old Issa Ibrahim al-Amur in the stomach as he was walking near a Jewish settlement in the Gaza Strip on Feb. 3. Al-Amur later died of his wounds. The soldier was identified as Daniel Stempler by an Israeli newspaper, Kol Hair. ''The soldier will serve out his sentence in a military prison," the Israeli army said in a statement. Source: Associated Press-NY-Feb. 25, 2001

On March 13, 1998 an Israeli soldier was photographed in Hebron (see picture below), aiming his assault rifle at a group of Palestinian children, a few of whom were "armed" with stones.

The Israeli army (IDF) routinely shoots Palestinian children in the head. This shooting spree has transpired since the 1980s, with a dearth of sustained outcry from the "international community" or the Western media, who do not consider it terrorism. 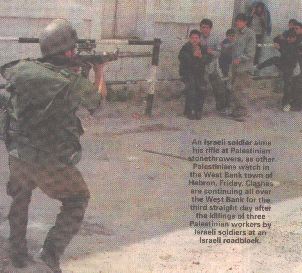 Imagine however if the soldier in the photograph was a German and the children he was taking aim at were Jewish, would his act then be considered terrorism? Of course!

Or what if the soldier had been a white southerner in the U.S. and the children in the photo were American black youths? Would the soldier's aim be considered terrorism? Certainly.

The Palestinians boil with rage in the face of this double standard. There can be no doubt that Palestinian children are a sub-human species in the eyes of the West. The Israeli troops can gun them and their parents down with near impunity and the West treats it as business as usual, the "inevitable result of sectarian hostilities."

But when the Palestinians take revenge on the Israelis for these murders, by bombs or others means, suddenly the whole machinery of condemnanion and outrage is brought to bear on the Palestinian killers of Israelis. Everyone is expected to "speak out" and "not be complacent" in the face of the "terror attacks on the Jewish people."

This sly racism informs the establishment's reporting of the Middle East. Arab blood is cheap. Israeli army terrorism against Palestinians is met with overwhelming complacency in America. When Israelis shed the blood of Arab children, the West shrugs.

Attacks on Jewish or Arab civilians are equally heinous, part of an endless cycle of tragedy which can only be averted when the Israeli aggressors who have stolen the Palestinians' land and shot thousands of them to death, begin to treat them as human beings with inviolable human rights.

The murder of adult Palestinian civilians and Palestinian children must cease being business as usual. It is state terror pereptrated by the Israeli government and made possible by American tax dollars, weapons and munitions.

Let us have the courage and integrity to call it terrorism and condemn it in the halls of Congress and the columns of our newspapers as forcefully as we condemn the crimes of Hamas against Jewish civilians. Otherwise our talk of human rights and safety for Israelis is little more than hypocritical racism; a cover for Israeli supremacy--concern only for the suffering of a "Master Jewish Race" and not for the native Arab semites. Such behavior is the real "anti-semitism."