Israeli Army Maj. Uzi Dayan said that the soldiers acted "according to regulations" in opening fire on the van with automatic weapons at a checkpoint outside Hebron.

Ali Abu Zneid, 37, a cousin of the deceased, was in the van and fell uninjured under the others' bodies. He said that the Jewish soldiers, "shot to kill."

One of the protesters, Samer Karameh, 13, his head covered with blood, was admitted to Hebron hospital. According to reporters on the scene and the deputy director of the hospital, Israeli soldiers shot him in the head with a live bullet. The boy was in critical condition, said his physician, Dr. Namora Abdul Rahib. Several other Palestinian protesters were also shot by Israeli soldiers today. 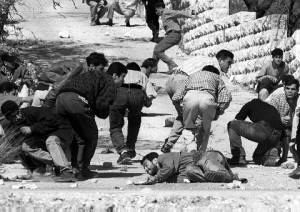