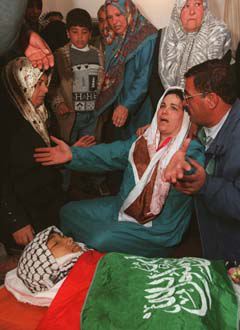 The mother of Samer Karameh weeps in her home in Hebron, Palestine, over the bullet-ridden corpse of her thirteen year old son, who died on March 17, 1998, after being shot in the head by Israeli soldiers, during protests against the murder on March 10 of three Palestinian construction workers.

No Israeli government action was taken against the Jewish soldiers who murdered the 13 year old.

"Israeli soldiers can kill Palestinians with impunity. They take innocent lives and get away with it."

Elsewhere, Israeli army (IDF) and Border Police commanders met with Palestinian reporters in Hebron yesterday to discuss the events that led to the shooting of eight Palestinian journalists March 13 by the IDF.

IDF Hebron Commander Col. Yigal Sharon said the soldiers and Border Police were unable to discern that those they were shooting were journalists because of conditions at the scene.

Sharon said he would do everything in his power to enable journalists to cover Hebron and advised them to avoid standing among Palestinian protestors (because the IDF shoots them at will).