Yet Another Palestinian Kid Is Gunned Down by Israelis 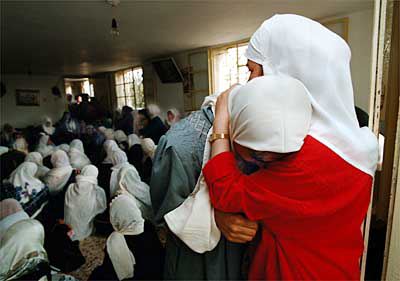 The two sisters of 17 year old Iyad Rahwa Qarabsi cry over his murder. The unarmed boy was machine-gunned to death in a Palestinian village by a Jewish settler, Sept. 17, 1998.

The eyewitnesses said the motorists shot without provocation. The shooting occurred around noon in the West Bank village of Beitunia.

Witnesses said about 10 high school students were walking along the main road on their way home from school when a vehicle with Israeli license plates pulled up near them.

The passengers rolled down their windows and began firing from a pistol and an assault rifle, said Raed Abdel Rahman, 17, one of the students who escaped injury. "Everybody started to jump and take cover," said Rahman.

A high school student who was also on the scene, Hassan al-Qadi, told reporters, "They were shooting randomly."

The wounded were taken to nearby Ramallah Hospital. Iyad Rahwa Qarabsi, 17, a high school senior described as an outstanding student, was shot in the stomach. He died at the hospital about an hour later, according to Ramallah hospital director Shauke Harb.

A doctor described the cause of death as bullet wounds from an M-16, an American-made, military assault rifle that Israeli settlers and soldiers carry.

At the family home, Qarabsi's mother collapsed on the floor and wept over the murder of her teenage son. "My beloved, you didn't come home with your schoolbooks today!" she sobbed.

Ibrahim Murar, the principal of Beitunya's 700-student Palestinian high school said, ""He was one of the very best students in the school. School was more important to him than anything else."

After being held in custody for three days, the Jewish gunman, Avshalom Ladani, 35, a member of the West Bank settlement of Dolev, was released by Israeli authorities. Ladani immediately joined a party at a Jerusalem hotel where he was feted as a hero.

"We call on all [Jewish] residents to view Avshalom's behavior as upstanding citizenship," declared an advertisement placed in Israeli newspapers by the Yesha Council, a settlers' group. The ad said the Jewish killer was being "persecuted."

Israeli Prime Minister Binyamin Netanyahu refused to condemn the shootings of the Palestinian students. According to the Sept. 21 Washington Post, "His aides pleaded extenuating circumstances..." They said the killer had been "provoked."

Israeli officials said the shooting was not an act of Jewish terrorism; they termed the settler's action merely "carelessness," and "violence that was disproportionate."

"This sounds to me like it was really an act of self-defense, if perhaps a careless one," said David Bar-Illan, an adviser to Netanyahu.

This is the second shooting within two days in which Israelis killed or wounded Palestinian youths. On Tuesday, Sept. 15, a Jewish settler shot and wounded 16-year-old Mohammed Musa Dweik in the Palestinian village of Zatara.

In America, one of the most zealous supporters of the gun-toting Israeli settlers and their right to automatic weapons banned in the U.S., is Brooklyn Congressman Charles E. Schumer.

Schumer helped promote and pass the the Federal government's assault weapons ban, which outlawed the sale to the American people of 19 types of semiautomatic weapons, many of which are possessed by Israeli settlers. Schumer has stated, "I have made it (gun control) one of my life's works..."

Except in Israeli-occupied Palestine.

Letter to the Editor

A question for Rep. Schumer: how is it that you favor disarming American citizens while you encourage the possession of assault weapons by Israeli settlers, who fire indiscriminately at unarmed Arabs, resulting in the murders of Palestinian youths?

The Virtual Museum of the Israeli Holocaust Against the Palestinians

Copyright©1999 by Michael A. Hoffman II

This website is made possible through financial donations. Please send yours today to: