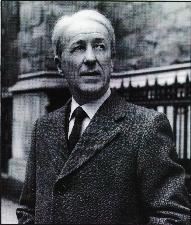 An Exchange of Correspondence Regarding Malachi Martin

A double-minded man is unstable in all his ways. -James 1:8

Editor's note: Laicised Jesuit priest Malachi Martin, would seem to be a double-minded occultist--if the evidence of this transcript from the Art Bell radio program is any indication. A leading figure in the Church of Rome and the author of the bestselling novel, Windswept House, he has everyone from ex-Presbyterian minister Gerry Matatics to mainstream journalists, enthralled.

Transcribed by the Campaign for Radical Truth in History directly from off-the-air audio-cassette copies of the Art Bell radio broadcast with Malachi Martin as received on local Seattle, Washington radio, April 4-5, 1997. (Tapes are on deposit in our archives)

Art Bell (hereafter: A.B.): Father, may I ask you about this? If you were not a Catholic priest, but instead were a Native American, would you be a Medicine Man? And if so, a Medicine Man is, from time to time, called to drive out spirits.

M.M. I'll tell you Art what I think, now that you've asked a personal opinion of a very difficult subject, but my experience is the following and I'm not merely taking about Native Americans...I have seen such miracles of cure and restitution and de-possession worked by these people, including Native Americans--really shamans--you know, the old type. Because of my beliefs I must conclude that my Lord Jesus Christ in whom I believe and who is the source of all power, has used them in their innocence and their faith, to cure people outside the reach of a Catholic priest like me. I cannot deny that...There are people who have nothing to do with Catholicism or with some of them, Christianity. But it has worked and I've had that experience and I can't deny it.

A.B.: Is there any line, anywhere that we should not be crossing, and if there is, is this (cloning) one of them?

M.M.: Well, I'll tell you my immediate answer. I haven't really considered it deeply, but I've given it a certain amount of consideration and it's this: If I can get to cloning another human being, without violating the rules of morality, then in principle I cannot see what's against it.

(Art Bell describes himself as a "libertarian")

M.M.: I also share this view. I do not believe that human governments have anything to say to the inner decisions of a man or woman. Those decisions must be made in the light of their religious education and their religious tradition. But the last thing in the world that I want to interfere with, that is government. They should have nothing to do with it. For instance, one of the difficulties of the abortion discussion today in America is that its become politized (sic). Its become a political football.

M.M.: And that therefore obfuscates the moral issues at stake. It involves vested interests, including money. I'm not broaching the whole question of abortion by that, I'm just saying the intrusion of government into my private life is unwarranted.

A.B.: Is this where the Church and the State should be separate?

M.M.: Of course. Totally separate. They should have their own bailiwick, there own territories to deal with. And if the Church cannot persuade people to accept its message, then the Church cannot impose that by government means.

A.B.: Then why Father is the Church trying so desperately to do so?

A.B.: So the Church has become political?

M.M.: Churchmen have...They have failed and therefore they have resorted to other means and this hasn't worked because man is a free animal. And, a, so, I'm with you there. I dislike any intrusion of the government in my private life--the private life of the individual...

M.M.: There are spheres of phenomenon that don't respond to anything. When they meet these phenomena--for instance the (possessed) person... suddenly has the power of levitation.

A.B.: Have you seen that with your own eyes?

M.M. (In another portion of the broadcast): I must confess to you Art, I know very naughty people. I know murderers and they've stopped their murdering, most of them. I know Mafia people...and I know men who have sliced up other men in their particular type of business, but they're just naughty. They're not possessed. (Laughs). They're just sinful. And that's not possession.

M.M.: (Later in the broadcast): There were two men coming to us along the street, middle-aged men in ordinary clothes and I knew they had just committed a murder. I knew that.

M.M. I knew that, yell, because of the demons with them.

A.B.: You actually saw the demon with them?

Editor's Note: According to a website on exorcism, Mr. Martin also allegedly claims to have seen Satan in his apartment: "I was standing on a stool in my apartment, reaching for a book and I saw him. He was crouched on the floor looking at me. His body was like a muscular pit bull terrier, but the face was recognizably human. It was the Devil's face. I recognised the eyes. They were eyes of the coldest, deadliest hatred. When the Devil sprang at me, I fell from my stool and broke my shoulder, but I felt fortunate. I had seen Satan and I had lived."

Malachi Martin's Approbation for the Spurious Book of Enoch and Evolution

Caller: It (the "Book of Enoch") goes into how this particular angel miscegenated--basically corrupted all species--it miscegenated with them.

M.M.: One particular angel, the chief angel, whose name is given in Scripture as Lucifer, Son of the Dawn, said, "No I haven't got a mortal body, I will not serve."

Editor's note: This is a church myth, based on man-made superstitions concerning Lucifer which, contrary to Mr. Martin, appear nowhere in the Bible. The sole reference to Lucifer in Scripture is in Isaiah 14:12. It is not a reference to an angel, as Martin claims. Lucifer is the name given to the king of Babylon or to Babylon as a whole. "The king is compared to the morning star, radiant star, son of the dawn." -- A Catholic Commentary on Holy Scripture (London: Thomas Nelson, 1951, p. 552).

Editor's note: The Bible tells us that if we fear Yahweh we need fear no other. Here Mr. Martin further embroiders the "Lucifer" tradition, upgrading him to the rank of super-devil, while demoting Satan to a weird subordinate position:

M.M.: When you do exorcisms you find out that there are two demons--there are many other demons--one who responds to the name of Lucifer and he's the big honcho, he's the big banana. And there's another one who's not as big but very important, called Satan. Lucifer, his symbol of course is the scorpion.

Editor's Note: The 1917 Fatima apparitions are believed by many Catholics to be authentic. Fatima decrees that the "errors of Russia" will spread if the commands of the apparaition are not fulfilled. The reference is to the 1917 Jewish-Communist Russian revolution. The Fatima apparition has not one word of warning concerning Hitler and the Nazis. Fatima only condemns "Russia's errors" (Communism). Part of the Fatima apparition story hinges on a top-secret message delivered to Pope John 23rd, who was supposed to announce it, but who refused to do so. Mr. Martin claims to have seen it, but is under an "oath" not to reveal it, which apparently has more force than Blessed Mary's alleged command to reveal it to the world.

M.M.: Now what's the Third Secret (of Fatima)? It's rather a dire document. It's not pleasant reading at all. I'm under oath not to reveal the actual details of it because I read it...I can't break my oath in that matter.

Editor's Note: Mr. Martin uses his psychic "second sight" to reveal mysteries of the past of which historians are unaware. Here he relates a tale about Hitler and the Nazis. However, Hitler never made the statements attributed to him by Mr. Martin. Also, Hitler had executed Germans long before 1938, contrary to Mr. Martin's claims, most notably during the "Night of the Long Knives" in 1934, when he liquidated the revolutionary elements in the German S.A. to placate conservative generals and industrialists:

M.M.: In 1938 there was this peculiar display of lights, which we now know--at that time the scientists said, "Oh this was Aurora Borealis"--and of course we now know it wasn't Aurura Borealis. And by the way, that night, that night in August of 1938, Hitler, Adolf Hitler himself was in the Wolf's Lair at Berchtesgarden, he was there with his chief people, Goebbels and Göring and Himmler and their aides. And they watched this phenomenon of light, brilliant light and you know what Hitler said?

M.M.: He said, "Gentlemen, this means we now go to bloodshed." Hitherto--by that time by the way, he had taken Czechoslovakia and Austria and the Sudetenland and he was well on his way to be a powerful figure. He hadn't any blood, no German blood had he shed. But looking at this, this man, instinctually--he was possessed, by the way--he said, "Now this is the sign that we have to shed blood, gentlemen."

A.B.: Was that a sign of the beginning of the Final Solution?

Editor's Note: Hal Lindsey predicted, in a string of sensationalist mass market books, that Christ would return and the so-called "rapture" would take place during the decade of the 1980s. Mr. Lindsey persuaded numerous Judeo-Churchians to slavishly support the War Zionism of the Israelis. Pastor Herman Otten has published important documentation exposing Lindsey in Otten's newspaper, Christian News.

Caller: My question is, I wanted to know if you were familiar with the, a, story that came by--at least to me--by Hal Lindsey--the evangelical author and prophetical scholar?

Caller: He's on the ball.

Copyright©1999 by Michael A. Hoffman II