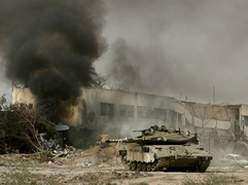 March 14, 2006--Other than in some equatorial banana republic, where else could an image like this one be seen, than in Israeli occupied territory? An Israeli tank blitzkrieging a Palestinian jail, for no reason other than to display Israel's barbaric might and rub the nose of the Palestinians deeper into the ground of their humiliation and occupation, in the hope that the Palestinian victims will retaliate and strike back with armed resistance, which the western media will then play up to Israeli advantage.

On Israel Radio, Israeli leader leader Avigdor Lieberman urged Israel's military to use its air force to "erase" the jail complex, and to topple its structures onto the Palestinian prisoners trapped inside."There is no point in drawing this out," Lieberman said. "The air force should do something. There is no point in endangering IDF (Israeli) soldiers. We should simply erase that building, bring it down on all those hiding out there." 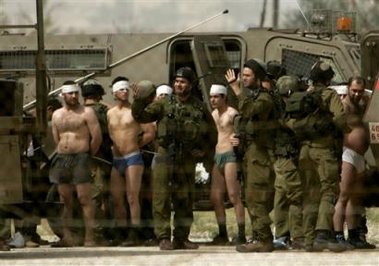 This being Purim, the Palestinian prisoners were forced to strip to their underwear in front of cameras. Even partial nudity is considered a deep shame in Arab cultures. It is not a coincidence that these Palestinian men were stripped of their humanity during the festival of Purim, Judaism's barbaric celebration of eternal vengeance.

The Israelis are out to get the imprisoned Palestinian assassin of an Israeli cabinet member? But the Israelis are themselves assassins to the core, although the infantalized American media almost never terms Israeli assassination by that naughty word, preferring "targeted killing" instead.

The Israelis have assassinated hundreds of Palestinian leaders and this mass assassination is applauded by Hillel Halkin in the Wall Street Journal, by Charles Krauthammer in Time magazine and by George W. Bush, whose ally, Ariel Sharon, used a missile to blow a crippled sheik out of his wheelchair. That act of bloodthirsty cowardice was good for a hearty laugh among the thugs in the White House. But now the world is called upon to summon a "steely resolve" as the "noble Israelis strike a blow in the war on terror" in assaulting a jail "full of vicious Palestinian assassins."

One has to be a retard to accept the official story of this despicable assault on a prison, but the ranks of American neo-cons are full of bona fide retards.

by Michael Hoffman and Moshe Lieberman