Killing children is no longer a big deal 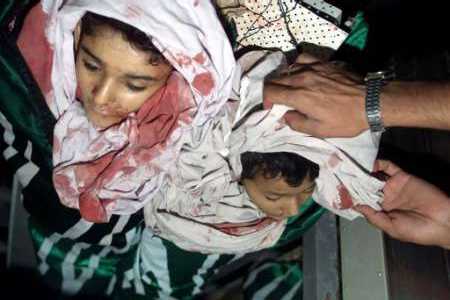 "The plain fact, which must be stated clearly, is that the blood of hundreds of Palestinian children is on our hands."

More than 30 Palestinian children were killed in the first two weeks of Operation Days of Penitence in the Gaza Strip (beginning September 30, 2004). It's no wonder that many people term such wholesale killing of children "terror." Whereas in the overall count of all the victims of the intifada the ratio is three Palestinians killed for every Israeli killed, when it comes to children the ratio is 5:1. According to B'Tselem, the human rights organization, even before the current operation in Gaza, 557 Palestinian minors (below the age of 18) were killed, compared to 110 Israeli minors.

Palestinian human rights groups speak of even higher numbers: 598 Palestinian children killed (up to age 17), according to the Palestinian Human Rights Monitoring Group, and 828 killed (up to age 18) according to the Red Crescent. Take note of the ages, too. According to B'Tselem, whose data are updated until about a month ago, 42 of the children who have been killed were 10; 20 were seven; and eight were two years old when they died. The youngest victims are 13 newborn infants who died at checkpoints during birth.

With horrific statistics like this, the question of who is a terrorist should have long since become very burdensome for every Israeli. Yet it is not on the public agenda. Child killers are always the Palestinians, the soldiers always only defend us and themselves, and the hell with the statistics.

The plain fact, which must be stated clearly, is that the blood of hundreds of Palestinian children is on our hands. No tortuous explanation by the IDF Spokesman's Office or by the military correspondents about the dangers posed to soldiers by the children, and no dubious excuse by the public relations people in the Foreign Ministry about how the Palestinians are making use of children will change that fact. An army that kills so many children is an army with no restraints, an army that has lost its moral code.

As MK Ahmed Tibi (Hadash) said, in a particularly emotional speech in the Knesset, it is no longer possible to claim that all these children were killed by mistake. An army doesn't make more than 500 day-to-day mistakes of identity. No, this is not a mistake but the disastrous result of a policy driven mainly by an appallingly light trigger finger and by the dehumanization of the Palestinians.

Shooting at everything that moves, including children, has become normative behavior. Even the momentary mini-furor that erupted over the "confirming of the killing" of a 13-year-old girl, Iman Alhamas, did not revolve around the true question. The scandal should have been generated by the very act of the killing itself, not only by what followed.

Iman was not the only one. Mohammed Aaraj was eating a sandwich in front of his house, the last house before the cemetery of the Balata refugee camp, in Nablus, when a soldier shot him to death at fairly close range. He was six at the time of his death.

Kristen Saada was in her parents' car, on the way home from a family visit, when soldiers sprayed the car with bullets. She was 12 at the time of her death. The brothers Jamil and Ahmed Abu Aziz were riding their bicycles in full daylight, on their way to buy sweets, when they sustained a direct hit from a shell fired by an Israeli tank crew. Jamil was 13, Ahmed six, at the time of their deaths.

Muatez Amudi and Subah Subah were killed by a soldier who was standing in the village square in Burkin and fired every which way in the wake of stone-throwing. Radir Mohammed from Khan Yunis refugee camp was in a school classroom when soldiers shot her to death. She was 12 when she died. All of them were innocent of wrongdoing and were killed by soldiers acting in our name.

At least in some of these cases it was clear to the soldiers that they were shooting at children, but that didn't stop them. Palestinian children have no refuge: mortal danger lurks for them in their homes, in their schools and on their streets.

Not one of the hundreds of children who have been killed deserved to die, and the responsibility for their killing cannot remain anonymous. Thus the message is conveyed to the soldiers: it's no tragedy to kill children and none of you is guilty.

Death is, of course, the most acute danger that confronts a Palestinian child, but it is not the only one. According to data of the Palestinian Ministry of Education, 3,409 schoolchildren have been wounded in the intifada, some of them crippled for life.

The childhood of tens of thousands of Palestinian youngsters is being lived from one trauma to the next, from horror to horror. Their homes are demolished, their parents are humiliated in front of their eyes, soldiers storm into their homes brutally in the middle of the night, tanks open fire on their classrooms. And they don't have a psychological service. Have you ever heard of a Palestinian child who is a "victim of anxiety"?

The public indifference that accompanies this pageant of unrelieved suffering makes all Israelis accomplices to a crime. Even parents, who understand what anxiety for a child's fate means, turn away and don't want to hear about the anxiety harbored by the parent on the other side of the fence.

Who would have believed that Israeli soldiers would kill hundreds of children and that the majority of Israelis would remain silent? Even the Palestinian children have become part of the dehumanization campaign: killing hundreds of them is no longer a big deal.

Please send the most generous donation you can in support of the work of Michael A. Hoffman II

Or donate online by VISA or Mastercard