The Israeli Assassination of

On March 22, 2004 the Israelis assassinated the Muslim religious leader, Sheik Ahmed Yassin. After a morning prayer service, the 67 year-old sheik, a quadriplegic, was leaving a mosque in Gaza, in his wheelchair, when he was murdered by an Israeli in a US-supplied helicopter gunship who fired a missile at Yassin on orders of Ariel Sharon.

Sheik Yassin was imprisoned for nine years by the Israelis and only released as part of a quid pro quo involving a botched, 1997 assassination attempt by the government of Binyamin Netanyahu on a Hamas diplomat in Jordan, Khalid Meshal (the Israeli Mossad had tried to spray poison in his ear with a high tech weapon).

The murder of Yassin is an act of state terror guaranteed to provoke more of the suicide bombings the Israeli government thrives upon: "This is worse than a crime, it is an act of stupidity," veteran Israeli peace activist Uri Avnery told Britain's "Guardian" newspaper. "This is the beginning of a new chapter of the Israeli-Palestinian conflict. It moves the conflict from the level of a solvable national conflict to the level of religious conflict, which by its very nature is insoluble."

Avnery described the assassination of Sheik Yassin as the act of Israel's "bankrupt political and military leaders" who were trying to cover up their failures by a catastrophic escalation. "This act will not only endanger the personal security of every Israeli, both in the country and around the world, but also the existential security of the state of Israel. It has grievously hurt the chances of putting and end to the Israeli-Palestinian, Israeli-Arab and Israeli-Muslim conflicts," Avnery said. 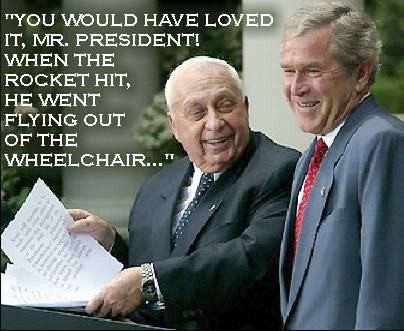 But Avnery's opinion is the minority view among Israelis. In an article titled, "Israel defiant over Yassin killing," the BBC reported on March 22 that, "soundings of Israeli opinion taken by various media suggest most Israelis welcome the assassination" of the Muslim religious leader.

The murder serves the interests of the Bush administration which seeks to impose a police state in the US under the pretext of a "war on terror" which Bush administration policies deliberately inflame. The Israeli assassination of Sheik Yassin is widely believed to have been carried out with US approval. Palestinians have until now mostly avoided targeting US personnel or facilities. But that may change, and the Palestinians may play into Bush's hands.

In a statement attributed to Hamas, the Muslim guerrillas declared, "The Zionists didn't carry out their operation without getting the consent of the terrorist American administration, and it must take responsibility for this crime." If Hamas seeks reprisals against Americans, the US government can then escalate their targeting of the Palestinians and associate them with Osama bin Laden and the terror war, while fully adopting the terrorist Israeli government as "allies in the war on terror." The US could also take a larger role in the oppression of the Palestinians in the occupied territories by claiming the oppression was part of the war on terror.

The assassination of Mr. Yassin was carried out with US-supplied military hardware -- equipment over whose use the US government, by law, retains some measure of control. If we had objections as to how the Apache and other military aircraft are being used, Bush could have objected to Congress. The lack of such objections signals to Sharon that his equating of the Israeli war against the Palestinian people with the broader US-led "war on terror" is a winning strategy.

Fate of the Terrorist Rabbis

There are many terrorist rabbis in Judaism, the late Meir Kahane being the most notorious, though not necessarily the most murderous. The alleged Arab assassin of Rabbi Kahane is serving a 40 year prison sentence in New York's maximum security lock-down, while the assassins of Sheik Yassin receive applause among neo-Conservatives in America.

Israeli army chaplains often compare Palestinians to "Amalek," a nation which followers of the religion of Judaism believe is fated for extermination. These Judaic chaplains encourage Israeli troops to shoot Palestinians of all ages and sexes at every opportunity. The Israeli army has killed thousands of Palestinians, including hundreds of children, since the start of the latest Intifada in September of 2000. If it is right to kill the Muslim religious leader Ahmed Yassin, is it also ethical to kill Israeli army chaplains who inspire atrocities against Palestinian civilians?

And what of Rabbi Moshe Levenger, and many rabbis like him? Levenger is a convicted murderer (of an unarmed Arab shopkeeper, for which he served a few months in jail), and one of the most bloodthirsty founders of the Talmudic "settler" movement, who has much innocent Palestinian blood on his hands. Levenger continues to stir up pogroms against Arab villagers.

Is there a Palestinian "right to self defense" against criminal rabbis and the atrocities they foment, and if so, does it extend to the assassination of such rabbis? Certainly any Palestinian killing of any rabbi, no matter how guilty that rabbi may be of atrocities against Palestinians, would still qualify as a terror act in the eyes of almost all US Establishment opinion-makers. Assassination of political and religious figures is universally regarded as an act of terror when Arabs do it. If any Arab were to kill a terrorist rabbi in the Israeli state or in New York state for that matter, such a killing would be immediately labeled a terror act by the US government and the US media would search for an "Al Qeada" link.

But when the Israelis commit assassinations they are described as "part of the struggle against terror." CNN stated, "The Israeli attack on Yassin follows weeks of Israeli anti-terrorism military operations into Gaza. Several Palestinians, including civilians, have died in the operations."

Only bamboozled goyim in America and Britain accept this double-standard; the international community does not. The rest of the world regards the Israeli-American "war on terror" as a charade which exists to give cover to the state terror of Washington D.C. and Jerusalem.

Bush preaches "democratic and civil principles" to the Arab world while he encourages and supplies the Israeli assassins who murder accused individuals without prosecution, trial or conviction. The rule of law is thus cast aside in favor of the law of the jungle by none other than George W. Bush.

Prior to Yassin's murder, Israel had assassinated five of the nine top Hamas resistance leaders. The message of the latest assassination, of the Hamas chaplain Yassin, is that the Israeli-American System needs terror. It fattens on it, swears by it and is fully manifested only by means of it.When Muslims moderate their stand (and Sheik Yassin was a a moderating influence on Hamas), put out feelers toward diplomacy, or seek a settlement, the Israeli-American monstrosity responds with missiles and bullets aimed at Muslim civilians and religious figures, in order to instigate more of the reflexive, retributive bloodbath that is then presented on American telescreens as "proof" of the instrinsic and ineradicable bestiality of Arabs and Muslims.

This cycle of Israeli terror and Islamic resistance is part of the Cryptocracy's Great Game.