Researched and curated by Michael Hoffman 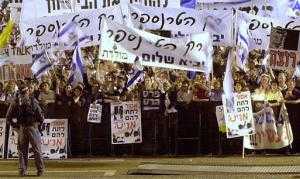 March 11, 2002.: Thousands of Israeli racists and supremacists demonstrate in Rabin Square demanding the ethnic cleansing of the occupied territories of Palestine, with the "transfer" (forced deportation) of the entire Palestinian nation.

A Warrant for Genocide

In 1923, radical Zionist Ze'ev Jabotinsky-- spiritual father of not only of Israeli Prime Minister Menachem Begin but of Brooklyn Rabbi Meir Kahane-- wrote that the "sole way" for Jews to deal with Arabs in Palestine was through "total avoidance of all attempts to arrive at a settlement"-which Jabotinsky euphemistically termed the "iron wall" approach. Not coincidentally, a picture of Jabotinsky graces Prime Minister Ariel Sharon's desk. Source: The Village Voice, "Death Wish in the Holy Land," Dec. 12, 2001

"I can make careful use of the intelligence at Israel's disposal to identify, locate and kill...with minimal loss of innocent life, by such means as booby-trapping their telephones, rocketing their cars and offices, etc. In a word, assassinate them. Sounds good to me.

"...hold a trial with the help of witnesses similary abducted from the Palestinian territories. If necessary it (Israel) should apply physical pressure (a euphemism for torture) to these witnesses..." The Wall Street Journal, August 28, 2001, p. A14.

Rabbi Calls for Genocide of Arabs

During a sermon preceding the 2001 Passover holiday, the influential Israeli Rabbi Ovadia Yosef exclaimed: "May the Holy Name visit retribution on the Arab heads, and cause their seed to be lost, and annihilate them." He added: "It is forbidden to have pity on them. We must give them missiles with relish, annihilate them. Evil ones, damnable ones." Source: Ha'aretz April 12, 2001

Israeli Minister Rechavam Ze'evi, who took his place in Ariel Sharon's cabinet March 7, 2001, a former Israeli army major-general, wants the 3 million Palestinians expelled from the West Bank and Gaza Strip. Ze'evi is the founder of the Moledet party.

Joining him in Sharon's cabinet is the Russian-Jewish immigrant Avigdor Lieberman, the new infrastructure minister. The leader of a political party, Mr Lieberman has called for Israel to bomb Egypt's Aswan dam.

Statements by the Founders of Zionism and the Israeli State

"We declare openly that the Arabs have no right to settle on even one centimeter of Eretz Israel...Force is all they do or ever will understand. We shall use the ultimate force until the Palestinians come crawling to us on all fours."-Rafael Eitan, chief of staff of the Israel Defense Forces, quoted in Yediot Ahronot, April 13, 1983, and The New York Times, April 14, 1983.

"We must use terror, assassination, intimidation, land confiscation, and the cutting of all social services to rid the Galilee of its Arab population."-Israel Koenig, "The Koenig Memorandum."

"We shall reduce the Arab population to a community of woodcutters and waiters."-Uri Lubrani, Israeli Prime Minister Ben-Gurion's special adviser on Arab Affairs. Source: "The Arabs in Israel" by Sabri Jiryas.

"...the need to sustain the character of the state which will henceforth be Jewish...with a non-Jewish minority limited to 15 percent. I had already reached this fundamental position as early as 1940 [and] it is entered in my diary."-Joseph Weitz, head of the Jewish Agency's Colonization Department. From "Israel: an Apartheid State" by Uri Davis, p. 5.

"Everybody has to move, run and grab as many (Palestinian) hilltops as they can to enlarge the (Jewish) settlements because everything we take now will stay ours...Everything we don't grab will go to them."-Ariel Sharon, Israeli Foreign Minister, addressing a meeting of the Tsomet Party, Agence France Presse, Nov. 15, 1998.

"Spirit the penniless population across the frontier by denying it employment... Both the process of expropriation and the removal of the poor must be carried out discreetly and circumspectly."-Theodore Herzl, founder of the World Zionist Organization, speaking of the Arabs of Palestine, "Complete Diaries," June 12, 1895 entry.

Jewish Racism and Terorrism According to Rabbi Ginsburg

Rabbi Yitzhak Ginsburg, head of the Kever Yossev Yeshiva (school of Talmud) in Nablus stated, "The blood of the Jewish people is loved by the Lord; it is therefore redder and their life is preferable."

The killing by a Jew of a non-Jew, i.e. a Palestinian, is considered essentially a good deed, and Jews should therefore have no compunction about it. Source: Yitzhak Ginsburg, "Five General Religious Duties Which Lie Behind the Act of the Saintly, Late Rabbi Baruch Goldstein, May his Blood be Avenged"

Rabbis Place Curse in a Midnight Ceremony in an Israeli Cemetery

ACRE, OCCUPIED PALESTINE - Ultra-orthodox Lubavitch activist Meir Baranes placed a Kabbalistic curse on Pope John Paul II. Three Jewish ultra-orthodox "haredim" took part in the pulsa de nura ("lashes of fire") ceremony in a cemetery. Footage from the rite was broadcast on Israeli Channel 2 television on Monday, March 20. Observers suspect that the ceremony was staged in cooperation with Channel 2, which denied the charge.

Baranes, 32, was alleged to have initiated the ceremony. He is suspected of belonging to a Jewish terrorist organization. Baranes said he and the others were followers of the late Lubavitcher Rabbi, Menachem Mendel Schneerson, a favorite of former Pres. Ronald Reagan. Reagan made the Lubavitch rabbi's birthday "Education Day USA" by public law. The Lubavitch are highly praised by the US media, including NY Times religion editor Peter Steinfels. The Lubavitch operate hundreds of hate sites on the world wide web. On some of these Jesus Christ is defamed and insulted. The Hasidic Lubavitch sect was founded in the 18th century by Rabbi Shneur Zalman whose book, "Tanya" decrees that all non-Jews are "supernal refuse."

"It is a shame for the Jewish people to go crawling to the gentile pope," Baranes said. Baranes's has published leaflets saying that the late Schneerson is God (the Lubavitch believe Schneerson was the Messiah). He has conducted numerous cursing ceremonies.

We will take a child for a child, Israelis say

Tension rose anew after an outburst by Israeli Foreign Minister, David Levy, in which he threatened to kill "child for child" if guerrillas rocketed Israeli border towns.

The Lebanese leader Selim al-Hoss, described the Israeli official as "evil" and "afflicted by racism and arrogance." Mr Levy, looking flushed and angry, told the Israeli Knesset that the Jewish nation would retaliate "blood for blood, soul for soul, child for child" if Hizbollah guerrillas in south Lebanon fired on Israel's northern border towns.

It was not the minister's first outburst in recent days. Earlier in February he threatened to make the soil of Lebanon "burn" in the event of a Hizbollah attack. Levy's behaviour added to indignation generated by the Israeli assault on Lebanon on 8 February, when Israeli jets bombed three power stations, injuring at least 15 civilians.

Lebanon's Selim al-Hoss replied: "The children of Lebanon whom Levy is threatening to kill will remain the torch of the resistance that cannot be extinguished by hate or terrorised by aggression. Their innocence will remain the light which eliminates the darkness of the sick spirits and exposes their bad intentions." Source: The Independent Feb. 25 2000

The four - Michael Ben-Chorin, Netanel Uzari, Yoel Lerner, and Yosef Dayan - issued the book in honor of Goldstein who slaughtered 40 Palestinian men and boys while they knelt in prayer in the Ibrahimi Mosque at Hebron's Machpela Cave, on Purim 1994. (Purim is the Jewish commemoration of vengeance against non-Jews).

The book, Baruch Hagever ("The Blessed Man"), has sold thousands of copies among Jews, and includes an article written by Rabbi Yitzhak Ginsburg, the head of an Israeli yeshiva (religious school). Ginsburg's article "sings the praises" of the killer and calls Goldstein, a 'saint.' "The entire book is indeed full of his praises. It should be noted that no Israeli rabbi (including the 'moderates' among them) has said a word against the contents of the book."

Ginsburg declares in Baruch Hagever that what Goldstein did in murdering the unarmed Palestinian civilians at their house of worship, constitutes, "a fulfillment of a number of commands of Jewish religious law...Among his (Goldstein's) good deeds, as enumerated, are...taking revenge on non-Jews, extermination of the non-Jews who are from the seed of Amalek...and the sanctification of the Holy Name.

"The murders have led, in the rabbi's opinion, to...clear knowledge among the Jews that 'the life of a Jew is preferable to the life of a non-Jew'...

"Goldstein is indeed being worshipped as a saint in (the Jewish settlement ) Kiryat Arba. His intercession before God is asked by pilgrims and it is reported that he cures the ill and generally helps those Jews who ask his help."

The Israeli Chief Rabbi of the Sephardim, Eliahu Bakshi Doron, in a radio broadcast on Tuesday, July 9, 1996, praised the Biblical figure Phinehas for having killed the Israelite Zimri, because Zimri had sex with a Midianite woman. Rabbi Doron said that Phinehas had committed a "pure" act. He then referred to Zimri as "the first reform Jew."

Reform Jews allow inter-marriage between Jewish persons and those of non-Jewish extraction, a form of integration long condemned by Orthodox Jews. A leader of the Reform Jews, Uri Regev, called for a criminal investigation of the chief rabbi, saying that Rabbi Doron's sanction of the murder of Reform Jews should be prosecuted.

Yisrael Lederman, who was sentenced by a military court to 20 years in prison for killing a Palestinian, is suspected of throwing boiling water on Member of the Knesset Yael Dayan, while she was touring Hebron on Oct. 22, 1996.

Yediot Aharonot reports that Lederman had only served two years of his murder sentence when then Israeli Chief of Staff Rafael Eitan, who once compared Palestinians to "cockroaches scurrying in a bottle," pardoned and released him. Two years later, Lederman snatched a baby out of the arms of a Palestinian mother .

Rabbi Avraham Hecht, chief rabbi of the Congregation Sha'are Zion in Flatbush, New York and until recently the president of the Rabbinical Alliance of America, a national organization of 540 Orthodox rabbis, called for the assassination of Yitzhak Rabin and praised Baruch Goldstein, who slaughtered forty Palestinian civilians while they knelt in prayer at a mosque.

Of Goldstein, Rabbi Hecht said, "I think Goldstein is a great man, a holy man," Hecht says. "If I ever visit [Hebron], I'm going to visit his grave."

Rabbi Hecht's assassination decree was issued on June 19, 1995 in the basement of a Manhattan synagogue, during a meeting of the International Rabbinical Coalition (IRC) , a 3,000-member international organization founded in 1993 to encourage the mass expulsion of the Palestinian people from their land.

Hecht, a member of the IRC's eight-person American rabbinic steering committee, declared that returning any part of Israeli territory seized from the Palestinians is a violation of Jewish religious law. Hence, assassinating Rabin--"and all who assist him"--is not only permissible, but necessary.

In his own defense, Rabbi Hecht stated, "All I said was that according to Jewish law, any one person--you can apply it to whoever you want--any one person who willfully, consciously, intentionally hands over human bodies or human property or the human wealth of the Jewish people to an alien people is guilty of the sin for which the penalty is death.

"And, according to Maimonides--you can quote me--it says very clearly, if a man kills him, he has done a good deed."