The Israeli Holocaust Against the Palestinian People 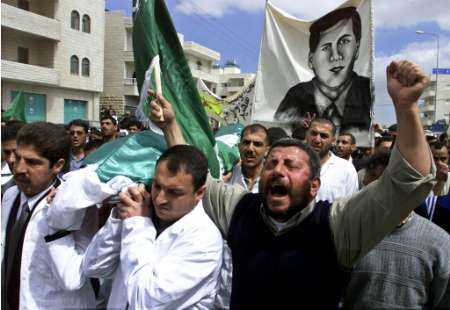 Yamama Hospital personnel carry the body of Palestinian Dr. Ahmed Numan Uthman, 38, the hospital's administrator, who was killed in the Palestinian ghetto of Al-Khader, by Israeli troops, March, 2002. Other mourners hoist his portrait aloft (in the background) during the funeral procession. 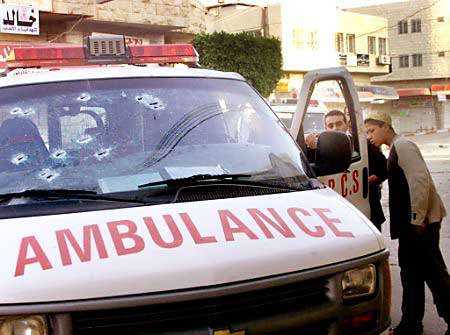 On March 4, 2002, Israeli troops opened fire on an ambulance in the Jenin refugee camp and killed a doctor, 57 year old Khalil Suleiman. Three medics and a nine year old girl were wounded in the Israeli army attack.

"All the hospitals and clinics in the northern West Bank need medicines and medical supplies," the Palestinian health ministry said in a statement. "They are not getting through because of the Israeli soldiers." The ministry said that ambulances and vehicles were blocked at the Jalazun checkpoint north of Ramallah, where it charged Israeli troops of beating one driver and forcing the Palestinians to put the medical supplies on the road.

Two international medical relief agencies, Doctors of the World and Medicins du Monde-Suisse, accused the Israeli army of attacking and harassing its medical personnel. The groups said that doctor Mustafa Barghuthi, president of an affiliated group, the Union of Palestinian Medical Relief Committees, and his assistant were wounded by Zionist troops during clashes in Ramallah on Friday. "We are shocked that humanitarian and medical staff may be targets of Israeli snipers," Doctors of the World said in a statement.

The Israeli Holocaust Against the Palestinian People / Archives / News Bureau