Relax, human rights fans, he's a kosher war criminal, so it's okay to give a stiff-armed salute to the West's favorite killer. Altogether now...

Ariel Sharon: no war crimes trials for this kosher killer

In 1953, Ariel Sharon attacked Qibya, a West Bank village, slaughtering more than 60 inhabitants. Sharon's soldiers shot "every man, woman and child they could find" and then dynamited 42 houses, a school and a mosque (Chicago Tribune, Feb. 8, 2001).

In the early 1970s, Sharon led the "pacification" of Gaza, in which large numbers of Palestinian homes were bulldozed and hundreds of Palestinians forcibly deported to neighboring countries.

Fatmeh Dakik (at right in photo above), age 5, had her leg blown off when Sharon ordered the Israeli air force to carpet-bomb the civilian population of Beirut in the summer of 1982

In 1985, a U.S. Military Law Review analysis documented that Sharon had "command responsibility" for the Sept. 16-18, 1982 massacres at Sabra and Shatila, which resulted in the deaths of at least 700 Palestinians. A BBC documentary broadcast a similar finding this month (June, 2001).

Both the "Holocaust" industry and the U.S. government have embraced Israeli Prime Minister Sharon and applauded his ongoing shootings of Palestinian children, his rule by assassination ("eliminations") and his use of F-16 jet fighters against Palestinian neighborhoods; calling these crimes a "policy of restraint."

No one will be labeled a racist, a bigot or a hater for refusing to commemorate the Palestinian and Lebanese victims of Sharon and the Zionism and Judaism which spawned him. Therefore, I refuse to call to mind any longer the Jewish victims of the Nazis, or join in any of the morbid civic ceremonies associated with their official cultus.

I am not going to hallow victims of Nazism from more than a half century ago while obliterating the memory of victims of Sharon from last week. I will not join the Judeo-Masonic system that venerates the contretemps of one "Chosen" people, while relegating massacred Palestinian children to the garbage can of history.

If "Holocaust" agitation were anything other than the most self-serving propaganda, "Holocaust" activists and their allies would have mobilized the world to protest the holocaust against the Palestinians in the autumn of 2000 and the spring and summer of 2001, and rush them food, medical aid and a protective buffer of neutral troops from other nations. But they did no such thing.

Watching my fellow Americans' conformity, their unquestioning allegiance to the Jewish party line, I note that they exhibit all the traits "Holocaust" mavens accuse the German people of exhibiting under Hitler.

"Holocaust" movies, TV shows, school classes, symposia and museums have not sensitized us to preventing other holocausts in the present, they have only taught us to worship so-called "Jews," as part of a new religion -- the religion of Judaism for Gentiles that constitutes Holocaustianity. 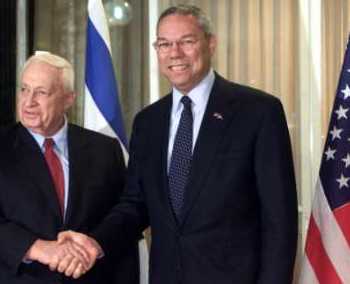 American leaders like John McCain, Colin Powell and George W. Bush (whom the Jewish lobby did its best to defeat last November), laud and finance war criminals, assassins and child-killers as long as they are Israelis, while authorizing the hounding and hunting of old men like John Demjanjuk.

In the face of this damned hypocrisy, I say to hell with the 1940s-era "Holocaust." It has nothing to do with preventing other atrocities and war crimes from happening again to other people. "The Holocaust" is merely a means for ensuring that Israelis may slaughter whomever they choose with billions of American tax dollars.

If Ariel Sharon is not a war criminal, then no one is. Hitler must have also exhibited "a policy of restraint." Obviously, Jewish Communist partisans refused to observe a "cease-fire" with the Nazis. The Zionists under the Third Reich declared war on the Germans first and Jewish people refused to "arrest those responsible for acts of violence and terrorism."

At last it is clear. One may behave like a war criminal, holocaust another race under occupation and steal their land for "lebensraum," as long as it is done under the mantle of Judaism and Zionism.

Dictators and tyrants the world over have Sharon and his American fans to thank for the rehabilitation of an old standard of warfare, to which "Never Again" does not apply. The appropriate chant now is, "Heil Sharon!"

[Hoffman is a former reporter for the New York bureau of the Associated Press. Send $3 for a catalog of his books, tapes and newsletters to Box 849, Coeur d'Alene, ID 83816 or visit www.hoffman-info.com]

Copyright ©2001 by Michael A. Hoffman II