The most radically enlightening revisionist books, tapes, CDs, DVDs and newsletters in the land are here, at our secure online Bookstore

Craig Heimbichner responds to Paranoia Magazine's review of his book, "Blood on the Altar"

Thank you for reviewing my book, " Blood on the Altar: The Secret History of the World's Most Dangerous Secret Society" in the Fall, 2005 (issue #39) of your magazine, "Paranoia: The Conspiracy Reader" (pp. 62-63). Your review was much-appreciated, but contained some notable errors and omissions which I must point out.

You write that I mention "97 degrees of Freemasonry," but provide the reader "nothing further on this intriguing claim." Actually, in my glossary (p. 148) I note that the 97 degrees belong to the Memphis Rite of Masonry, and I cite this fact earlier, on p. 92, as well. Basic information on this rite and a complete list of all of its degrees can be found in a standard Masonic work such as A E. Waite's "Encyclopaedia of Freemasonry, "Volume 2, pp. 241-248 (Wings Books, New York, 1996 edition).

I never state any enormity such as that the OTO is "behind just about every social movement or event," as you allege. While I posit that the political stagecraft known as "Left" and "Right" are minted from the kabbalistic schema of Rabbi Isaac Luria (1534-1572), it is an illusion of kabbalistic and Masonic sorcery that these divisions encompass "every social movement or event," and one that I do not share.

You also claim that my book "falls flat" when it comes to "naming influential OTO members," and imply that I give little beyond the well-known names of Aleister Crowley and Jack Parsons. It appears that you have not read my book with sufficient attention, given the fact that I write at length about representative powerful individuals spanning the history of the twentieth century, who were connected to the OTO in significant ways in key areas, from the military and British Intelligence, to literature, journalism, medicine, science fiction, the homosexual rights movement and NAMBLA, the space program, Scientology, Hollywood, the pagan revival ("Wicca"), B'nai B'rith, the Zurich Union of Zionists, the Soviet Union's Trade Delegation, the Communist Party, Israeli Intelligence (Shin Bet), the CIA and even the Vatican and certain wings of Protestantism.

Furthermore, you expressed some puzzlement in that I cast doubt on Masonic membership lists while still affirming higher Masonic control in the United States and elsewhere.  In truth, the Masonic membership lists in circulation are a deliberate mixture of truth and falsehood, not to be taken at face value.  Regarding the United States, Masonic control was not solidified until after the Civil War.  The Cryptocracy has deepened its psychological control over the populace by rewriting history to serve its purposes, including the recent push (as you note) to paint the colonial breakaway from England as a top-to-bottom Masonic project.

This Masonic boast serves to make Lodge control over this country look inevitable.  Such conceit further serves to distract the half-educated from the historical fact that Masonry was already the power behind the throne (and Church) of England:  why then would a Masonic rebellion against the immense, successful Masonic power of the British Empire make sense?  It doesn't among real historians rather than Masonic enthusiasts and their dupes.  Historians who value exactitude cannot twist facts to overblow the picture of Masonic dominance at a point in history in which it would have been false to affirm it, however much the shadowy presence of Masonic control is undeniable today.

Finally, your reviewer cited my remarks about occult themes in "Scooby-Doo" as a kind of joking caveat against certain aspects of my subject matter, though paradoxically he quickly distanced himself from suggesting that my work was not serious or worthy of study.

It is a commonplace among scholars who are of a New Age orientation to belittle Christian researchers who raise alarms about the sublimation of popular culture to the service of clandestine programming and ritual magick. Yet one of the points I try to make in my book is that, despite a good deal of misinformation and hysteria from Protestant Fundamentalists in this area, the interface between "harmless" mainstream children's culture and the occult is now more or less so blatant it is barely concealed.

This point was brought home with some impact at the prestigious, 14th World Jewish Congress of Jewish Studies held in late July and early August, 2005 at the Hebrew University in Jerusalem. A number of Israeli scholars from the field of the occult, and especially kabbalah, participated. Dr. Avraham Elqayam of Bar-Ilan University, an exponent of the kabbalah of Rabbi Yitzhak Luria, began his lecture with a call for a genuine revolution in the study of mysticism, calling for the consolidation of "new directions" in the teaching of kabbalah, and citing the Harry Potter books as one such "new direction," with the Hogwarts School serving as a model for the Lurianic paradigm.

So, while the spectacle of some obese Fundamentalist in the Bible Belt pounding his pulpit in fulmination against "Harry Potter" may tickle the funny bones of arch-hipsters, the reality is not quite so amusing: it just so happens that the heavy-hitters of kabbalistic black magic find in Harry Potter precisely the vehicle for the inculcation of their own dark philosophies among the masses. Perhaps it's a coincidence that it was the OTO that pioneered this kind of modernist pop-cult transmission as early as the 1940s.

Book Review of Heimbichner's "Blood on the Altar"

Blood on the Altar

The Secret History of the World's Most Dangerous Secret Society 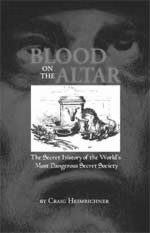 If you wish to pay with a check or money order, rather than with a credit card:

Mail order patrons send $15.99 plus $3.50 shipping in the US. In Canada send $4.50 shipping. In Europe send $8 shipping. In Asia send $10 shipping. Payment must be in US funds from a US bank. Order from: Independent History & Research Box 849, Coeur d'Alene, Idaho 83816. (Personal checks must clear the bank before the book can be shipped).