From Basra to Boise

Why the Muslims Will Defeat America

Steven Vincent was a reporter for neo-con media (National Review and the NY Times' Op-Ed page). He was killed August 2 by the Resistance in Iraq. I mourn the death of all penmen, even neo-cons. They should all be allowed to ply their craft without fear of death or injury.

But let's not mince words. Vincent was a poisonous voice, of that there is no doubt. He hoped that the Shiite city of Basra would become another Orlando, Florida. In other words, a traffic-choked, junk-food strewn, neon-lit capitalist dystopia, where everything and everyone is for sale all the time, to the highest bidder.

Vincent descends far down the sewer in this report, which he wrote for Bill Buckely's "conservative" magazine:

"It's painful to watch so many people persist in self-defeating behavior, especially considering that with its potential revenues from oil... and tourism, Basra could become the next Bahrain, Dubai, or, for all we know, Orlando. No wonder a few Basrans have expressed the despondent wish, 'If only we could empty people out the city and start over again with a new generation.' Many would start by ejecting the city's religious parties, which seized control of the political process after the January 30 elections. I don't have space to outline all the changes these groups have imposed on this once tolerant and carnal city; suffice to say, no booze, no discos, no music CDs, no un-hejabed women..."

Horror of horrors! A "carnal city" forced to go straight? How could that please the god of the dollar bill? No discos, no crap muzak, no half-naked women parading in public? How dare those Muslim bastards!

For the umpteenth time: this writer is not a "Muslim sympathizer." But in the wake of the dearth of militant, elite Christian resistance to the record-breaking public and almost universal, near-nudity on view on almost any American street in this summer of 2005, with little kids who see this shabby skin show scandalized and their innocence dented or destroyed as a result -- you're darned right I wish some Muslim army would come over here and put some clothes on the lost American females who have suckered in for the media's less-than-zero "culture," squandering their dignity, spirituality and intelligence in the bargain.

What price the dignity of future American mothers and wives -- girls as young as ten -- dressing in public like jungle natives, in what amounts to loin cloths, "apparel" that would have gotten them arrested for indecency as recently as the America of the 1950s? We are experiencing child-molestation on a mass scale! 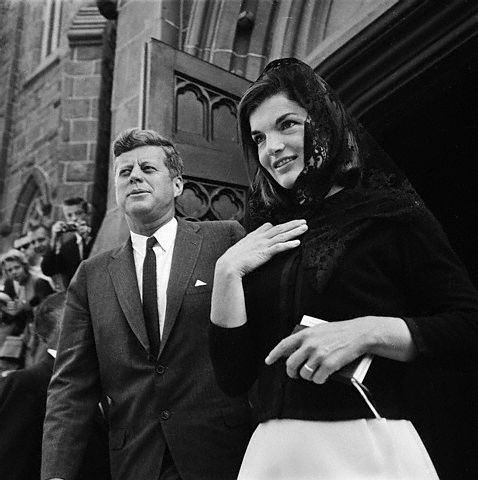 Jacqueline Kennedy in the Summer of 1958

When the Crusaders went to Arabia the first time around they did so ostensibly to liberate the Holy Land from the infidel. But today's Crusaders, still using Jesus Christ as their alibi, crusade to impose the filthy schizophrenia of American Churchianity on Muslim peoples: the "Jesus" of the jungle gym and the nudist camp; the "Jesus" of the Britney Spears' subalterns and their ubiquitous belly buttons.

No atheist sinks so low as those "Christians" who call America's inescapable landscape of carnival carnality "a Christian land." America is a pimpmobile; we ought to at least leave the holy name of Jesus Christ out of it. If America is a Christian nation, then the strip joints of Las Vegas are Christian-- the Vegas Strip having relocated from Nevada to almost every American village and town, with millions of the strippers regarding themselves as good Christians, no doubt because they shop at Wal Mart, vote for Bush and pay their taxes.

I am sorry that Mr. Vincent was killed in Iraq. But sadly and tragically, I understand why they killed him. He went to a country of decent women and intact families and served as a mouthpiece for the imposition of a Satanic whorehouse on simple, tribal people, and they would not go gently into that dark night. The same would have been true of Americans of the still Christian 1950s, for whom purity and innocence were not a joke or a commodity. All that changed from the 1960s onward, in the alchemical crucible of the advertising industry's incremental processing.

In 2005 American society has sunk lower than that of the dog and the pig, and Islam will surely conquer such a perverted nation of counterfeit Christians. God will allow it for the sake of scourging our land, as he did ancient Israel, until we salvage that which we have sacrificed on the altar of markets and merchandizing, a sense of shame and a mandate for the defense of the purity of our daughters and wives against the Money Power, and its legion of politicians and judges.

Our Christian ancestors did not need to learn virtues from Muslims. But today's "Christian" impostors, with their heedless acquiesence to America's scumbag pornocracy, surely do, and learn them they shall, as Steven Vincent did, the hard way, on dusty and bloody roads that lead from Basra to Boise.

by VISA or Master Card

Copyright© 2005 by Michael A. Hoffman II