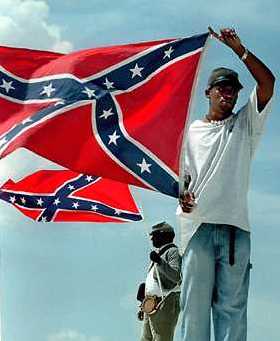 For an hour, the Confederate battle flag flew over the former site of the Eight Flags Display on U.S. 90.

Dressed in Confederate gray, a black man named Anthony Hervey marched with the banner clutched in his hands. His brother, Harry, accompanied him, wearing jeans and a Robert E. Lee T-shirt.

Hervey's devotion to the flag began when he discovered that a great-great-uncle, James Hervey, was a black American who fought for the Confederacy during the American Civil War. James Hervey served in the Army of Mississippi and was killed at the battle of Shiloh.

Further research helped Hervey discover records of at least 100,000 black Confederates who fought in the war.

"I am marching for freedom," Hervey said. "The battle flag stands for freedom and states' rights. The U.S. flag is the flag of slavery. It flew over 100 years of slavery, and Native Americans were annihilated under that flag."

For his march, Hervey chose the site where a Confederate flag once stood, one of eight representing entities that have governed the Coast. Harrison County removed the flags because of protests over the Confederate flag, a racist symbol to many, flying on the public beach.

Hervey's crusade also has taken him to Jackson. In the Jackson City Council chambers June 13, Hervey showed up wearing his battle grays, wrapped in the flag. A scuffle erupted between a Jackson man, who said he supported Hervey, and a city councilman who exchanged words, according to published reports. Hervey was not involved in the shoving match.

Hervey sees a correlation between the past and today's controversies over the flag.

"We currently live under a psychological form of reconstruction," he said. "Whites are made to feel guilty for sins of their ancestors, and blacks are made to feel downtrodden. This keeps all of us from communicating. The political correctness of today is killing the pride of the people."

Hervey is the founder of the Black Confederate Soldier Foundation, an Oxford-based, not-for-profit organization. Its stated mission is to foster new thought on the Civil War. Claims that the Confederate flag is a racist symbol are, to the group, part of a nonissue. Black Confederates, the group says, have been misrepresented in historical texts.

Hervey wants to build a memorial that will include the names of the black Confederates who fought and died in the War Between the States.

As the Hervey brothers continued their march, shouts of support and anger could be heard from passing motorists. A group of young black men hanging from car windows shouted at the pair. Hervey instructed his brother to look forward "like a true soldier."

"Don't even look at them," Hervey said, citing the young men's behavior as an example of black psychology today.

"They will yell a lot and want you to confront them, but they will not do anything," Hervey said.

"I found it appalling what happened in South Carolina, and I'm afraid this is going to happen in Mississippi." Hervey said. "We seek only to correct the errors in history - to right the wrongs done to the memories of these brave soldiers.

Copyright ©2000 by Michael A. Hoffman II